Get a FREE assessment of your rental property. Start here!

Get a FREE assessment of your rental property. Start here! 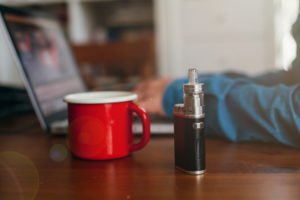 The question then becomes: What about vaping? In the past few years, more and more people have gone to enjoying e-cigarettes instead of smoking tobacco. Many people view vaping as a safe recreational activity that’s generally considered to be less harmful to a person’s health than smoking. This is a reason why vaping is often used as a means to quit the smoking habit.

Despite the hype around vaping, it has proven to be far from harmless. There are clouds of vapor that come from the use of vaping devices such as e-cigarettes. These leave a filmy residue on anything they touch, from walls to floors to furniture. Think about it: anywhere that air can travel, vapor can, too. It could reach every part of the inside of your home. This includes inside air vents and ductwork, where problems could go unnoticed for long periods of time.

The explanation why vapor causes so much trouble is because it’s not water, but glycerin. It doesn’t evaporate into the air like water vapor does, even though it looks a lot like it. In fact, it is somewhat oily. The emissions from an e-cigarette more closely resemble aerosol gas than water vapor. It holds particles that are formed out of chemicals, flavoring, and preservatives. When these particles come in contact with a surface, they cling to it. Over time, these particles combine into a thick film that is both difficult and expensive to get rid of.

When the film gets on hard surfaces like mirrors or windows, they can be wiped down relatively easily. Unfortunately, this isn’t the case with other areas like carpets, painted surfaces, and ductwork. Getting rid of the filmy residue that vaping leaves on surfaces like these are both time-consuming and costly and may harm some items permanently.

For example, the particles of vapor aren’t water soluble. That means fabrics and carpets may need to be professionally cleaned multiple times a year. Another challenge would be the painted walls because they are porous and vapor particles could easily get into every pore and stay there. The more texture there is on your walls, the faster the sticky film can build upon them. You would need to scrub off the film frequently, but the paint could be damaged during the process.

We are pledged to the letter and spirit of U.S. policy for the achievement of equal housing opportunity throughout the Nation. See Equal Housing Opportunity Statement for more information.

Please fill out this form and we will direct your message to the appropriate person.